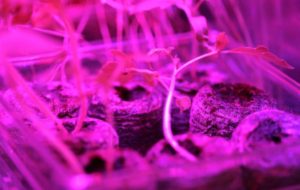 On October 15, 2019, the Department of Media Theory will host two talks: one by U.S. artist Suzanne Anker (Chair of the Fine Arts Department at the School of Visual Arts, New York City) on The Afterlife of Particles, and one by German scientist and cancer researcher Frank Rösl (Head of the Division of Viral Transformation Mechanisms, German Cancer Research Center, Heidelberg) on The Art and Science Experiment: A Critical View.

Suzanne Anker will focus in her talk on the circumstance that for Aristotle, the distinction between the organic and inorganic is a categorical given. However, in the twenty-first century such distinctions are under review. As synthetic biology breaks down the boundaries between discrete entities, forms in nature have become a hybrid mix. Her talk will consider the ways in which molecular mix and match is in keeping with the history of life’s complexity. Frank Rösl will offer a critical perspective on the fact that these days art is also emerging from laboratories: art and science are two disciplines where creativeness and imagination are the driving forces. Based on these attributes, the direct interaction and collaboration between artists and scientists can be very productive through exchanging ideas and insights from different, unbiased perspectives. Moreover, there are also many examples where “bioart” has been used as a medium to transfer a message to the consumer/observer as a kind of a metaphorical interpretation of cultural and scientific changes and their impact on our society. However, in the current discourse of contemporary bioart manipulating life has ethical implications and even limitations. In his talk, Frank Rösl will discuss these issues from the viewpoint of a scientist working in basic research who is open-minded enough to work together with artists, but who also sees the limits that must not be exceeded.

The Afterlife of Particles
Suzanne Anker, Chair of the Fine Arts Department at the School of Visual Arts, New York City, USA

Suzanne Anker is a visual artist and theorist working at the intersection of art and the biological sciences. Her practice investigates the ways in which nature is being altered in the twenty-first century. Concerned with genetics, climate change, species extinction, and toxic degradation, she calls attention to the beauty of life and the “necessity for enlightened thinking about nature’s ‘tangled bank’”. Anker frequently works with “pre-defined and found materials” — botanical specimens, medical museum artefacts, laboratory apparatus, microscopic images, and geological specimens. She works in a variety of media ranging from digital sculpture and installation to large-scale photography and to plants grown by LED lights. Her work has been shown both nationally and internationally in museums and galleries including the ZHI Art Museum, China; Everson Museum of Art, Syracuse, NY; Daejeon Biennale, Korea; ZKM, Karlsruhe, Germany; Walker Art Center, Minneapolis, MN; the Smithsonian Institute, Washington, D.C.; the Phillips Collection, Washington, DC; P.S.1 Museum, New York, NY; J. Paul Getty Museum, Los Angeles, CA; the Berliner Medizinhistorisches Museum der Charité, Berlin, Germany; the Center for Cultural Inquiry, Berlin, Germany; the Pera Museum, Istanbul, Turkey; the Museum of Modern Art, Kyoto, Japan; and the International Biennial of Contemporary Art of Cartagena de Indias, Colombia. Anker’s exhibitions have been the subject of reviews and articles in the New York Times, Artforum, Art in America, Flash Art, and Nature. Her books include The Molecular Gaze: Art in the Genetic Age, co-authored with the late sociologist Dorothy Nelkin, published in 2004 by Cold Spring Harbor Laboratory Press, and Visual Culture and Bioscience, co-published by the University of Maryland and the National Academy of Sciences in Washington, D.C. Her writings have appeared in Art in America, Seed Magazine, Nature Reviews Genetics, Art Journal, Tema Celeste, and M/E/A/N/I/N/G. Her work has been the subject of reviews and articles in the New York Times, Artforum, Art in America, Flash Art, and Nature. She has hosted twenty episodes of the Bio Blurb show, an Internet radio program originally on WPS1 Art Radio, in collaboration with MoMA in New York City, now archived on Alana Heiss’ Clocktower Productions. She has been a speaker at Harvard University, the Royal Society in London, Cambridge University, Yale University, the London School of Economics, the Max Planck Institute, University of Leiden, the Hamburger Bahnhof Museum in Berlin, the Courtauld Institute of Art in London, Banff Art Center, The Universidad de las Artes, Galapagos, Ecuador, and many others. Chairing the School of Visual Arts’s (SVA) Fine Arts Department in New York since 2005, Suzanne Anker continues to interweave traditional and experimental media in her department’s new digital initiative and the SVA Bio Art Lab.

Frank Rösl is a scientist and since 2002 head of the Division of Viral Transformation Mechanisms Research Programme “Infection, Inflammation and Cancer”, at the German Cancer Research Center, Heidelberg. This field of research received considerable publicity when Harald zur Hausen was awarded the Nobel Prize in Physiology or Medicine in 2008, his mentor and colleague with whom Frank Rösl worked for more than 15 years. Frank Rösl has been a professor in the faculty of Theoretical Medicine, University of Heidelberg since 2001. His research fields are: innate immunity and viral escape mechanisms; metabolic aspects, intracellular energy sensoring; papillomaviruses and non-melanoma skin cancer, vaccine development. In 1986 he received his doctorate from the Department of Molecular Biology of DNA Tumor Viruses, German Cancer Research Center. His habilitation thesis in 1994 was in virology at the faculty of Theoretical Medicine at the University of Heidelberg. Because knowledge and innovation do not only evolve within a well-defined field, but rather through transgressing boundaries and developing open and creative communication, Frank Rösl endeavours to bring art, science, and the humanities together to enable epistemic transfers. From 2008 to 2011 he was a member of the interdisciplinary research group “Bildkulturen” at the Berlin-Brandenburg Academy of Sciences and Humanities in Berlin, and in 2008 was co-applicant of the research project “Transfer-Knowledge — Knowledge-Transfer: On the History and Contemporary Relevance of Transfers between the Life Sciences and Humanities (1930/1970/2010)” in collaboration with the Center for Literary and Cultural Research (ZfL), sponsored by the German Federal Ministry of Education and Research (BMBF) from 2009 to 2013.

Ingeborg Reichle is Chair of the Department of Media Theory and was Founding Chair of the Department of Cross-Disciplinary Strategies (2017–2018), designing the integrated curriculum of the new BA study programme Cross-Disciplinary Strategies: Applied Studies in Art, Science, Philosophy, and Global Challenges at the University of Applied Arts in Vienna. She is a board member and co-founder of the German Association for Interdisciplinary Image Science (Deutsche Gesellschaft für interdisziplinäre Bildwissenschaft), and an active member of the U.S. College Art Association (CAA), the International Association for Aesthetics (IAA), and the International Association of Bioethics (IAB). In Vienna she serves as co-host for Leonardo’s LASER Talks (Leonardo Art Science Evening Rendezvous), an international programme of gatherings that bring artists and scientists together for informal conversations. Her main area of research and teaching is the encounter of the arts with cutting edge technologies such as biotechnology and synthetic biology, taking into account artistic responses as well as the respective discourses in the sciences and our societies in order to develop a critical understanding of the role of the arts in the twenty-first century. A further field of her research is the rise of new cartographies of contemporary art, which are evolving through the process of globalisation and fostering new post-colonial constellations in the art world.

Our guest lectures are open to all.