Ingeborg Reichle talks with Bio Artist Suzanne Anker at re:publica in Berlin about the future of our food culture 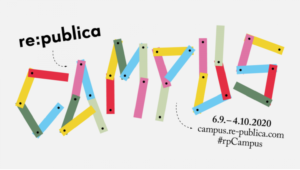 For more than three decades artists and designers have been responding in most diverse and innovative ways to how we will eat tomorrow. Our current dominant food system is based, to a large extent, on the growth of modern agribusiness – with disastrous effects. It is estimated that agribusiness, as one of the world’s largest manufacturing sectors, is responsible for about 37% of the total greenhouse gas emissions and is therefore a major driver of climate change. From the perspective of our food security in times of a growing world population and the current epic loss of biodiversity, it is high time to carefully think about how to grow our food in the future and how we can design our food culture in a sustainable way. In the context of this year’s Berlin-based re:publica festival, which is coming with a new hybrid format called #rpCampus, Ingeborg Reichle will be talking on September 21, 2020 with American bioartist Suzanne Anker, chair of the Fine Arts Department of the School of Visual Arts (SVA), New York City, about Suzanne’s work Astroculture with LED lighting systems to move agriculture indoors.

From September 21 to 25, 2020, the focus of #rpCampus will be on sustainability and its interplay with digitization. The topic “Über:Leben” (“about life”, which also means “to survive”) will deal about life from the perspective of nutrition and food production and will address questions like how we live — with each other, against each other, for each other, and in harmony with the planet? Can we only survive if we use digital technologies or are there limits to digitization that we should not cross? The consumption of food and nutrients, or energy in the abstract sense, is probably common to all forms of life and thus offers us a suitable start on the sustainable spectrum of topics. The political explosiveness of the debate about what and how we eat is shown on the one hand by the scandal about the poor working conditions in the meat industry, which have led to new corona hotspots. On the other hand, one can refer here to hostile working conditions in Europe for undocumented fugitives who pick tomatoes for a living in the European community at a pittance wage and without a contract of employment, thus undercutting the prices for small farmers in Europe and North Africa. This issue is thus particularly intertwined with globalization.
Some suspect the massive use of antibiotics to trigger this or subsequent pandemics or at least the production of multi-resistant germs. It is particularly important to us to separate justified criticism of globalization from conspiracy stories and to conduct a debate based on current research. At the same time, we do not shy away from questioning system-inherent grievances and discussing radical proposals for solutions, for example from the Degrowth movement. In workshops and fishbowl discussions we create synergies and symbioses to tackle the crisis of capitalism in the here and now. We are interested in biotechnological solutions as well as in the local agriculture of young farmers.

From Monday to Thursday keynote speeches and panel discussions will be streamed and discussed together with the speakers and the community in digital discussion rooms on the topics of nutrition, health, biodiversity, and transhumanism. During the workshop Friday, the central theses of the week will be picked up and solutions for a sustainable digital future will be worked on together. This event is funded by the German Federal Environmental Foundation (DBU). Re:publica is a conference in Europe that deals with Web 2.0, especially blogs, social media, and the information society. It takes place annually, usually in May, in Berlin. During three days talks and workshops on various topics are held, ranging from media and culture to politics and technology as well as entertainment. All talks and discussions are streamed directly to the Internet. The conference is organized by the operators of the German blogs Spreeblick and netzpolitik.org and is funded by the Medienboard Berlin-Brandenburg and the Bundeszentrale für politische Bildung. Re:publica is a variation of res publica which translates into “public matter”.

In the context of the event Ingeborg and Suzanne will talk about the fact that as the number of pollinators, such as bees, hummingbirds, butterflies, moths, and wasps, steadily decrease due to climate change, genetically modified organisms (GMOs) production, and chemical toxicity, the future of food production is in a suspended state. Without pollinators there would be no honey, apples, peaches, apricots, plums, lemons, limes, cherries, bananas, melons, mangos, papaya, blueberries, cranberries, onions, nuts, avocados, kidney and lima beans, coffee, tea, sesame oil, sunflower oil, tomatoes, cucumbers, chocolate, sugarcane, and even agave, which is used to make tequila. Currently, due to climate change, strawberries are being grown in Greenland as well as lettuce, potatoes, and cabbage as the polar ice melts. Many indoor farming companies are emerging in order to control environmental factors such as temperature, lighting, and humidity in which to grow plants. It was inn response to these developments that Suzanne Anker designed Astroculture, a living art installation, which has been exhibited at the Everson Museum in Syracuse, NY, the Daejeon Biennale in South Korea, the art space at abandoned rice silos in Houston, Texas, and the great Gothic Revival cathedral, St. John the Divine in New York. Astroculture has prompted a variety of responses from the public ranging from disbelief to awe to complaints that these plants are growing unnaturally. Seed banks, especially the Global Seed Vault in Svalbard, Norway, are intended to act as a seed embryo archive in the attempt to restore agricultural products for our food supply as the effects of climate change accelerate. Of course, seed banks store seeds ex situ and may not respond to their environments in the same fashion as when they are stored or dispersed in situ. Add to the mix biopiracy, the patenting of seeds, and issues concerning invasive species: what is in store for the future of food?

Ingeborg Reichle is a professor at the Department of Media Theory at the University of Applied Arts Vienna and served as the founding chair of the Department of Cross-disciplinary Strategies from 2017 to 2018, where she designed an integrated BA study program on applied studies in art, science, philosophy, and global challenges. Before joining the faculty of the Department of Media Theory as full professor in 2016, she was FONTE professor at Humboldt University Berlin. In 2004 she gained her Ph.D. from the Humboldt University Berlin with the dissertation Age of Technoscience: Genetic Engineering, Robotics, and Artificial Life in Contemporary Art, published in 2009 by Springer publishers, Vienna/New York. From Humboldt University Berlin she also received her postdoctoral habilitation in 2013. Her area of research is the encounter of the arts with cutting edge technologies such as biotechnology and synthetic biology, taking into account artistic responses as well as the respective discourses in the sciences and our societies with the object of developing a critical understanding of the role of twenty-first century arts.